Editors' Picks: Streaming at Home for the Holidays
a list of 34 images
updated 6 months ago

TV Series
a list of 22 titles
created 2 weeks ago 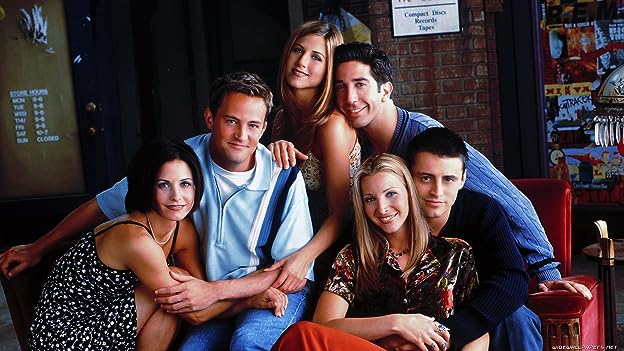 Revisit these 6 classic "Friends" episodes that are guaranteed to make you laugh.

All you need is Friends! See more »

Rachel says that Doctor Bobby Bobby has her believing that one of her legs is longer than the other. This is a well-known healer's scam, where holding the legs at an angle and then moving them together creates the illusion that they are changing in length relative to each other. See more »

In the final episodes when Rachel gets ready to leave the country for Paris for her new job she says how she worked for Ralph Lauren for 10 years, but she didn't start that job until 1999 and the show ended in 2004, therefore she couldn't have worked there for 10 years. Though five years have passed for the viewing audience, it's possible that 10 years have passed in the Friends universe in that time span. See more »

Phoebe: [Chandler's run off] Come on, Ross we've got to think like Chandler!
Ross: So where's the one place he'd never expect us to look?
[Scene Cuts]
Ross: So THIS is your Office?
See more »

The episodes that have been released on video/DVD were originally prepared for international (outside the U.S.) television distribution. These versions feature many scenes and/or pieces of dialogue that were trimmed prior to their broadcasts on U.S. TV. These unedited versions are not available on Blu-Ray or through digital platforms such as NetFlix. See more »

I've been reading a lot of these comments. Some people don't like the show...claiming it to be unrealistic or that the plot lines get boring.

I didn't discover Friends until a year or two ago (thanks to MY friends) but I ADORE the show in syndication and I hope to own the DVDs. Its damn funny and no one can deny it. Except for stiffs. And whats best about Friends is that its REAL.

Ross and Rachel getting old? How could it? Do relationships get old in real life? No, they're ongoing, sometimes stagnating, sometimes changing. Thats REAL.

This show is about 6 people who love each other like family...which I must say as an 18 year old... is very real. Once you hit your late teens - early twenties...things begin to change. You grow both closer to and further from your biological family, and as you reach more independence, you adopt another family of your own: YOUR FRIENDS.

We may not all sit in coffee shops, but we all LOVE our friends like they were blood. That's what this show is about. Makes you all warm and fuzzy (and sore from laughing) inside. And as a show: FRIENDS will always be a part of MY family.

Q: What are The Friend's Addresses?
Q: In MAD ABOUT YOU, which premiered in 1992, Lisa Kudrow plays a recurring, flighty waitress called Ursula. Both shows take place in the lower west side of NYC. Is this character supposed to be Phoebe's twin sister from FRIENDS?
Q: Which friends do not kiss each other?
See more »
Edit