Editors' Picks: Streaming at Home for the Holidays
a list of 34 images
updated 1 month ago 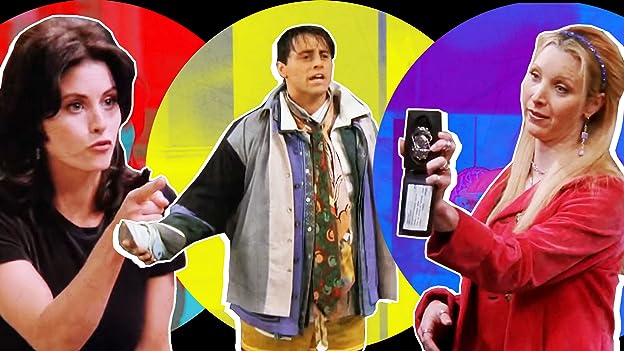 Now that all 10 seasons of "Friends" are available to stream, we've found 6 classic episodes that are guaranteed to make you laugh.

You can never have enough Friends! See more »

In Friends: The One with the Lesbian Wedding (1996), the group predicts that Chandler will be the last of them to marry. Ironically, it is Chandler that ends up getting married first as he and Monica are the first to have a committed marriage that doesn't end in divorce and the others (except Joey) all have unsuccessful marriages until Phoebe marries Mike Hannigan in Friends: The One with Phoebe's Wedding (2004). In an another irony, Joey serves as the officiant for both of the weddings that have long-term marriages even though he never gets married himself on the show. See more »

Ross is a paleontologist but is always seen working with the display on early humans which would be more of a job for an anthropologist. See more »

Joey: Get your sorry, non-believer ass out of my chair.
See more »

The credit clips are changed regularly, about twice a season. In TOW London the clips are only those that occur in that episode (Such as Chandler and Monica waking up in bed together, and a pregnant Phoebe eating cereal on her belly) See more »

Referenced in Fresh Off the Boat: The Shunning (2015) See more »

fantastic
12 November 2003 | by rossrobinson – See all my reviews

Friends has got to be one of the best Us Sitcom comedys ever. I'll be sad for this programme to end next year in 2004 because the whole team did such a fantastic effort to put everthing into this series. It was such a great programme and i think it will always will be. After 10 seasons the programme comes to it's end. I give this 10 out of 10.

Q: Where can I find track listings featured throughout the entire show?
Q: What is Friends and What is it about?
Q: What are the words for Phoebe's song "Smelly Cat"?
See more »
Edit