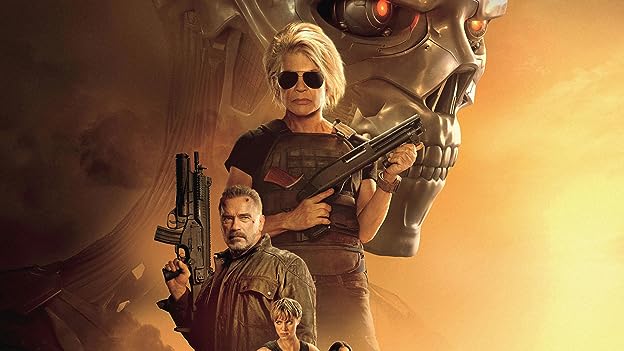 A machine from a post-apocalyptic future travels back in time to protect a man and a woman from an advanced robotic assassin to ensure they both survive a nuclear attack.

The Mexican worker Dani Ramos is hunted down by the indestructible terminator from the future REV-9 that kills her father and brother and is protected by the enhanced soldier also from the future Grace. They flee from the unstoppable terminator and out of the blue Sarah Connor helps them on the road. They head to Laredo, Texas, where Grace has the coordinates of a possible support and they meet the T-800 that killed John Connor and is living in an isolated with his family composed by a wife and a son for a long time. The group teams up to try to destroy the REV-9. Written by Claudio Carvalho, Rio de Janeiro, Brazil

Tim Miller wrote most of the action set pieces in great detail before the rest of the screenplay was finalized. David S. Goyer wrote parts of the rest, and came up with the name 'REV-9', although Billy Ray would later re-write a lot of Goyer's stuff, and added character moments. See more »

Rev-9 uses nanobots to control machines but does attempt not use them to reprogram the T-800 Terminator nor Grace's cybernetic enhancements.

I'll be honest, Dark Fate is more mediocre than unwatchable, probably the best Terminator since T2... yeah, I know, the bar is so low, it's like limbo dancing at this point. This feels similar to The Force Awakens: in itself a slick, decent movie, but I've already watched the much better original, so thanks but no thanks.

Positives? Mackenzie Davis, for whom I've had a hopeless crush since seeing her as a cute NASA geek in The Martian (and then again in Blade Runner 2049), plays a relatable, compelling character, with an intriguing mix of power and vulnerability. There are also a couple of neat set-pieces, especially in the first half, before everything becomes over-the-top tiresome.

Linda Hamilton and Arnold show up for fanservice. It's kind of nice to see them both back with significant roles but, as is typical of fanservice, it's like gorging on too much chocolate: tastes good at first, but then come nausea and a vague feeling of shame.

My main point is, the Terminator series is now hopeless, as the last movies, especially Genisys, have poisoned the well. The continuity is a mess and keeps being rebooted, so everything is pointless: no development can feel meaningful. Show of hands: who would be particularly surprised if the next Terminator movie was once again about John Connor leading the Resistance in another alternate continuity? No one? Thought so.

Also, the new villain being so talkative was possibly the single stupidest idea in the whole project. You know why Arnold in T1 and Robert Patrick in T2 were so terrifying? Because they shut up! They said very little and, the few times they spoke, it always felt like something they did out of pure necessity (probing for informations, setting up a trap) but was fundamentally alien to their nature.

This Rev-9 tries to talk its antagonists out of fighting him! Can anyone picture the T-1000 reasoning with its targets? The great Robert Patrick studied and imitated the body language of birds of prey to look creepier and inhuman, and the new bad guy wants to chat. Give me a break.