Search for "West Side Story" on Amazon.com

Rita Moreno Breaks Down 6 of Her Iconic Roles 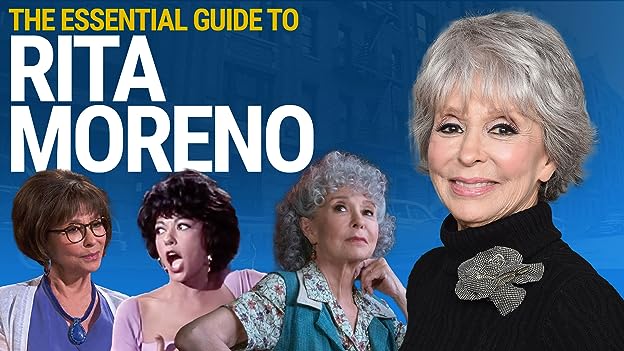 Rita Moreno breaks down 6 of her most iconic roles, discusses the struggles she's faced in Hollywood, and shares what it felt like to return to West Side Story 60 years later. She also dives into her revealing documentary Rita Moreno: Just a Girl Who Decided to Go for It.

West Side Story is the award-winning adaptation of the classic romantic tragedy "Romeo and Juliet". The feuding families become two warring New York City gangs--the white Jets led by Riff and the Latino Sharks, led by Bernardo. Their hatred escalates to a point where neither can coexist with any form of understanding. But when Riff's best friend (and former Jet) Tony and Bernardo's younger sister Maria meet at a dance, no one can do anything to stop their love. Maria and Tony begin meeting in secret, planning to run away. Then the Sharks and Jets plan a rumble under the highway--whoever wins gains control of the streets. Maria sends Tony to stop it, hoping it can end the violence. It goes terribly wrong, and before the lovers know what's happened, tragedy strikes and doesn't stop until the climactic and heartbreaking ending. Written by Anonymous

Unlike other classics, West Side Story grows younger! See more »

Despite winning an Oscar for his work in this film, this was the only film that Jerome Robbins ever directed. See more »

The length of Riff's cigarette in the lead up to the Jets song/dance. It starts out short and stubby, and just before they start singing and he flicks it away, it is much longer. See more »

[first lines]
[the Jets dance across the streets of New York, eventually coming to a playground where they toss around a basketball. The ball is intercepted by Bernardo, leader of the Sharks]
Riff: [snaps fingers at Bernardo] Come on.
[Bernardo drops the ball, Riff picks it up]
Riff: Beat it.
See more »

The credits at the end of the movie appear as graffiti on street signs. See more »

The Special Limited Edition DVD released by MGM in 2003 restores an intermission that was intended to be included in the original roadshow version but was subsequently dropped in order to create what the filmmakers termed a "rising tension" in the story. The intermission sequence was supposed to have taken place right before the song 'I Feel Pretty' and brings the film's total running time to more than 152 minutes. This break was used, however, for the film's first television showing in 1972 on NBC. It was broadcast in two installments, one each on separate nights, the first part ending at the break, and the second part beginning at the "I Feel Pretty" sequence. See more »

Although I think I've seen just about every musical there is from the forties to the seventies, I'd never seen West Side Story until last night. An amazing omission on my part, as having seen it, I just think it's simply wonderful.

I bought the DVD "on spec" in a CD/DVD exchange store in Sydney for $10. I've had it in my hand a couple of times before but have always put it back on the shelf. This time I went through with the purchase and am now wondering what could have come over me, not buying it before.

Those here who have said you really need to watch it on the Big Screen are absolutely right. In my case I watched it using a video projector throwing the image, big, bright and beautiful, onto a 12 foot screen. The photography used the wide screen format uncompromisingly. There was no caution here to frame the action for possible television cropping, or even much consideration given to a 2.35:1 "Cinemascope" presentation. Super Panavision's aspect ratio is not as wide as Cinemascope's 2.35:1, and every square inch of screen space was used for one or another important element of composition.

Bernstein's music is a tour de force. Having watched On The Town only a few days back, it was interesting to contrast the two musicals. On The town is, of course, 15 years or so older than West side Story, but a comparison between the two scores is chalk and cheese. You could tell that Bernstein was holding himself back in On The Town. It wasn't his project. The numbers were almost self-censored. But West side Story was his baby, and it shows.

The sheer brilliance of the music, the enchanting daring of it, its raucous atonality coupled with sweetness of melody are awesomely impressive, as show-stopper after show-stopper is thrown onto the screen to continually up the amazement quotient, time after time.

I played West Side Story loud, very loud. The surround sound knocked my socks off from the opening aerial ambiance of Manhattan streets to the orchestrations themselves. I remember Bernstein in the documentary about the concert version of West Side Story saying, aside to the camera, after "Cool, Boy" was recorded, "You know, this is pretty good..." One of the great understatements, even if coming from the music's creator.

See this film. Play it loud. Watch it on a big screen if you can. If you do you may, like I did, sit there thrilled, swinging your head from one side of the Super Panavision screen to the other, trying to take in the overwhelming avalanche coming at your eyes, your ears and your heart. It was an almost perfect transfer from film to DVD: color, sharpness, depth.

It's been a long while since I've watched a film with a silly grin on my face right through, sometimes gasping at the sheer knock-out brilliance of what film-making can be at its best. West Side Story was one of those times.

Q: Is this movie based on a book?
Q: Did Natalie Wood and Richard Beymer do their own singing?
Q: Were the songs in West Side Story eligible for an Oscar nomination? It seems odd that it was nominated for Best Picture but as a musical it received no Best Song nominations.
See more »
Edit