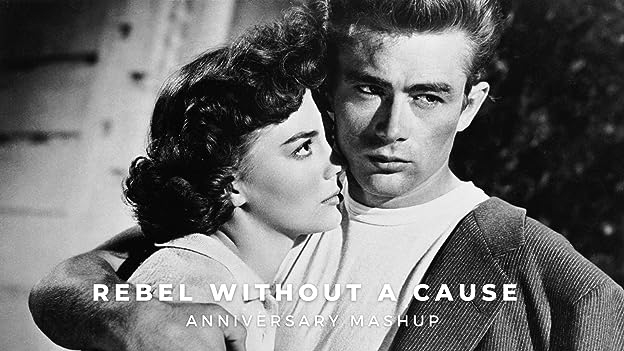 The movie was originally to be shot in black and white, and some scenes had already been filmed that way, when the studio decided to switch to color. The official explanation at the time was that "Twentieth Century-Fox," which owned the wide-screen CinemaScope process, had ordered that all films shot in the process had to be in color, but some also believe that Warners ordered the switch to head off comparisons with Blackboard Jungle (1955) and because James Dean's increasing popularity gave the film more prestige. Another film "MGM's" "Trial (1955)" was also slated to be shot at the same time in black and white CinemaScope. Due to the same demand it skipped that process and shot in standard widescreen black and white instead. See more »

The end scenes at the observatory are at night. Suddenly, there is enough daylight that flashlights and headlights are not needed. See more »

Not perfect, but still extraordinary
17 July 2000 | by zetes – See all my reviews

I was quite impressed with _Rebel Without a Cause_. I expected it to be quite standard, having only gathered its reputation because of the tragedy surrounding James Deans' death. Fortunately, it stood up on its own quite well. Its superficial situations are somewhat dated, which was inevitable, but its themes remain potent after many decades.

The major theme is the burgeoning relationship between adults and their teenage children. All three of the main characters are at different stages in this process. Jim (James Dean) is surprisingly at the earliest stage of this. His mother is pretty distanced and unresponsive already, but he still seems to communicate well with his father (Jim Backus, who is amazing. His character's relationship with his wife also provides an interesting view into 1950s gender politics; in one scene, Backus is wearing a cooking apron, which is very obviously meant for a woman). Judy (Natalie Wood, whom I didn't even recognize here) is almost completely rejected by her father, who feels that her affection is out of place in her teenage years. Worst of all is Plato, both of whose parents have left him alone in the world. He tries desperately to make Jim and Judy his parents (although from this vantage point in time, Plato seems resoundingly sexually attracted to Jim, and he sees Judy as a threat to their relationship. Although the writer/director has denied that forever, no human being can watch it nowadays without that thought constantly crossing their mind).

The reason that I say this film is flawed lies in the actions of Plato near the end of the film. I felt his escalating insanity was kind of a cop-out. Instead of actually delving into Plato's true character and motives by having intelligent and realistic dialogue and actions, he is just made to go batty, wherein he spouts off his thoughts as if he were some eight year old or man-child. Plato may have been sycophantic throughout the film, but he was anything but a moron. His actions provide an easy way for the director/writer to answer all questions about his character, and then to facilitate an ending which is tragic, but more than a little contrived.

Despite what I feel is a cop-out ending, _Rebel Without a Cause remains a thoroughly powerful film. I liked it, and I'll never forget it. 9/10

Q: Why is the support check from Plato's father dated 1956 when the movie was released in 1955?
Q: If Jim's car goes off the cliff, how can he be seen driving his car home from the "chickie run"?
Q: How did James Dean die?
See more »
Edit