Marcus moves forward with a plan to rescue the Mithraic children, but first he has to find them. Back at the settlement, Campion and Paul bond while on a hunting expedition with Father, and Mother ...

After Earth is rendered uninhabitable, Androids start a settlement and a new family with human embryos on the planet Kepler-22b.

After rekindling her connection to her creator, Mother finds herself distracted by intense feelings she didn't know she was capable of having, unaware that Marcus, Sue and the Mithraic are closing in...

Sundance Stars, Then and Now

Here are some well-known faces from Sundance over the years, as they brought their early movies to the festival.

TV Tracker: Renewed and Canceled Shows
a list of 99 images
updated 5 days ago

September Picks: The Movies and TV You Can't Miss
a list of 17 images
updated 2 months ago

Search for "Raised by Wolves" on Amazon.com

How 'Alien' Inspired Ridley Scott on "Raised by Wolves" 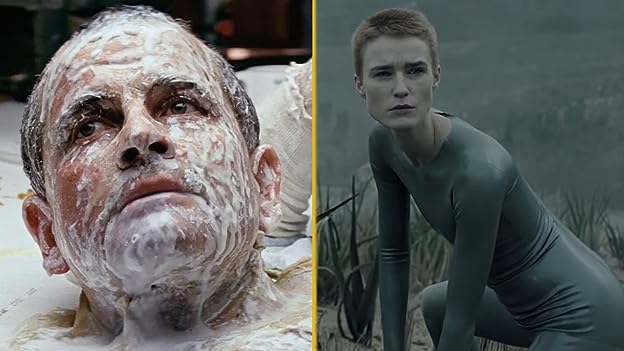 "Raised by Wolves" "presents a futurescape both familiar and radically novel thanks to director/executive producer, Sir Ridley Scott. Stars Travis Fimmel, Niamh Algar, Amanda Collin, and Abubakar Salim, and writer Aaron Guzikowski reveal to IMDb how this world was first actualized by Sir Scott's storyboards and what it was like to step into his vision.

After Earth is torn apart by religious differences and the human race teeters on the edge of extinction, an atheistic android architect sends two creations - Mother and Father - to start a peaceful, godless colony on the planet Kepler-22b. From executive producer Ridley Scott, Raised by Wolves follows Mother and Father as they attempt to raise human children in this mysterious virgin land - a treacherous and difficult task that's jeopardized by the arrival of the Mithraic, a deeply devout religious order of surviving humans. As the androids make contact with this zealous and dangerous people, they struggle to control the beliefs of their fiercely self-determining children.

The new planet, Kepler-22b, is 600 light years from Earth and is the first planet found by NASA in the Kepler system to be deemed within the goldilocks zone based on its distance from the star, Kepler-22. Kepler-22b was discovered in 2011 and the planet's mass is roughly twice the size of Earth and has an orbital period of 290 days. See more »

Started great. Was hooked. But the ending was really disappointing.

Q: What material the white liquid works as blood for the Androids made of?
Q: Should we assume that this is some Alternate Timeline in which Mithraism rather than Christianity replaced Roman / Greek Paganism?
See more »
Edit