R | 1h 48min | Drama, Sport | 6 March 2020 (USA)
2:15 | Trailer
10 VIDEOS | 29 IMAGES
Jack Cunningham was an HS basketball phenom who walked away from the game, forfeiting his future. Years later, when he reluctantly accepts a coaching job at his alma mater, he may get one last shot at redemption.

New and Upcoming VOD, DVD, and Blu-ray Releases
a list of 76 titles
updated 4 days ago
Create a list »

Search for "The Way Back" on Amazon.com

How 'The Way Back' Reignited Ben Affleck's Passion 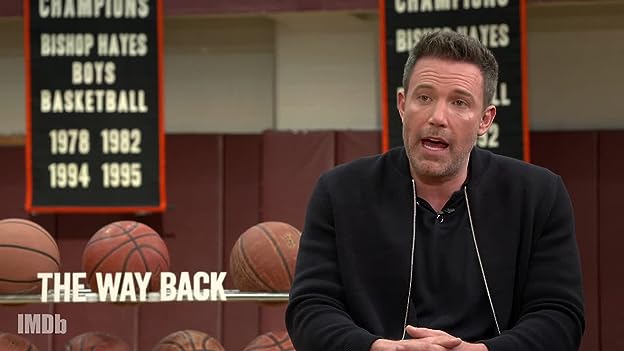 Ben Affleck, Janina Gavankar, and director Gavin O'Connor discuss the emotional but powerful filming of The Way Back and how it reconnected Affleck with his love of acting.

Back in high school, Jack Cunningham had everything going for him. A basketball phenom, he could have punched his ticket to college or even the pros, but, instead, he chose to walk away from the game, forfeiting his future. Jack's glory days are long gone...but, as it turns out, not forgotten. Years later, he gets the chance to take back his life when he is asked to coach the struggling basketball team at his alma mater. Jack reluctantly accepts, surprising no one more than himself, and as the boys start to come together as a team and win, he may get his last shot at redemption. Written by Warner Bros

Every loss is another fight.

Just like every single movie at the box office on the weekend of March 13th-15th, the Way Back suffered a horrible second weekend dropping 70%. Every movie suffered a drop off of over 60%. See more »

Jack Cunningham: You want to know why they're leaving you open? It's because they don't think you can hit the ocean from the beach.
See more »

The Way Back is a movie that is quite enjoyable especially if you are a fan of sports movies and love basketball. Ben Affleck gives a strong performance which feels very personal to him. This element heightens the film even more, it has a lot of things that you would find in the sports genre such as: Motivational scenes which make you feel good and make you want to support the characters. It doesn't oversimplify the game of basketball as well, the way they use strategies and plays feel like something you would actually see in a huddle of a high school basketball game and as a former assistant coach for a school basketball team I found that to be a really cool element. The way it handles the drama aspects outside of basketball and the real reason as to why the character is an alcoholic I found to be quite compelling and it felt quite emotional at times.

The film has a couple of drawbacks with the main one being that this is a little too cliched at times, a lot of tropes that you would see in sports films happen in this one, and I noticed that a lot of elements on the coaches interactions with the players were a little too similar to coach carter, which was a film that handled those elements better. Also the acting apart from Affleck for the most part was sub par, especially in the first act. The run time felt a little too long as well due to the fact that there were a lot of sub plots, I think it could have been better if they would cut some of them out to create a more tighter storyline.

Overall, I had a good time with the way back, i think if you're not a fan of the genre you wont find anything new here. However if you love sports, basketball and typical films in this genre you will have a good time like I did, and the awesome Ben Affleck performance is a bonus.